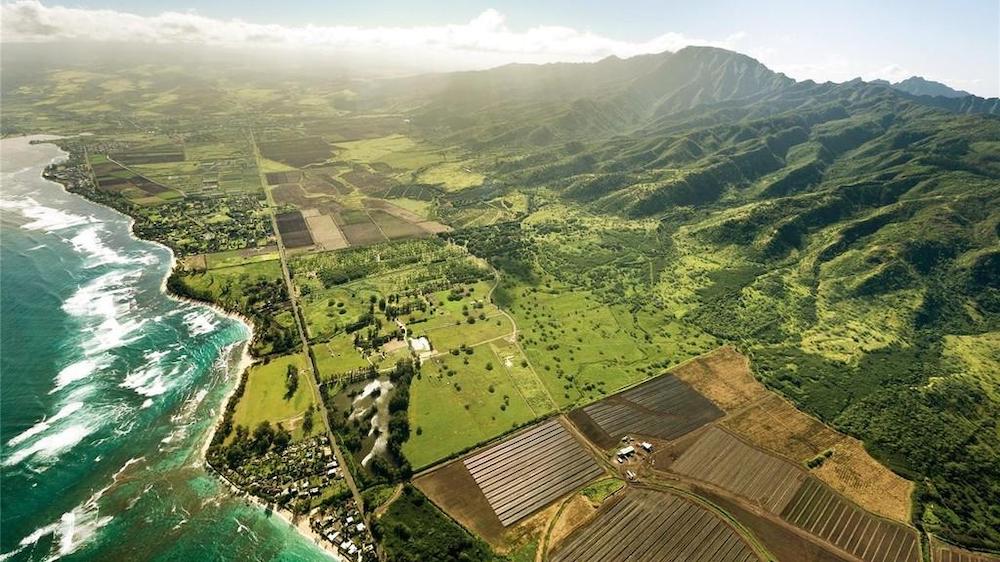 A huge piece of property in Hawaii with ties to Hollywood is now on the market for $45 million.

Located on the North Shore of the island of Oahu, the storied Dillingham Ranch spans 2,740 acres and stretches from the ocean to the mountains.

âI think it’s one of the largest contiguous land offerings in the state of Hawaii right now,â says the listing agent, Matt Beall.

On the enormous parcel, you’ll find a working ranch, a nursery, one of the largest coconut groves in the state, as well as almost 19 acres of oceanfront land.

Areas of the property have been used as locations for a number of movies and TV shows. The television shows “Lost,” “Hawaii Five-0,” “Magnum P.I.,” “ER,” and numerous others have all filmed on the property.

“Lost” fans will recognize some of the ranchâs coconut trees as the groves where Kate Austen and her fellow survivors of Oceanic Flight 815 ran into a polar bear during the showâs pilot episode. The show used the ranch as a backdrop on several other occasions during its six-season run.

If the mysteries of “Lost” weren’t exactly your thing, you might also recognize the ranch from a popular romantic comedy, “50 First Dates.” One of the trees on the property is where Drew Barrymoreâs character Lucy Whitmore crashed her car, triggering her amnesia in the movie.

It’s the varied backgrounds of this sprawling property that attract the location scouts.

âYou can get a really wide variety of shots, but it’s technically all in one location,â Beall says. âIt makes perfect sense that there’d be all these different shows and movies that used it, because you’re dealing with one owner, and you get one access to all of these different shot possibilities.â

Movie and television production on the property dates back at least to the mid-1960s.

The history of the ranch dates back much further. Benjamin Franklin Dillingham established the property in 1897.

Dillingham was a sea captain who regularly sailed between San Francisco and Honolulu. After an injury, he stayed in Hawaii and founded the Oahu Railway and Land Company (OR&L) and several sugar cane plantations.

His son Walter Dillingham built the house on the property known as Dillingham Lodge. It has eight bedrooms and plenty of space, but it isn’t the main reason people are looking at the property.

âThe house is really just not a huge part of the offering. It really is the land. It’s a historic lodge,â Beall says.

The lodge, used by many shows, was where Anthony Edwardsâ Dr. Mark Greene spent his final days on “ER” in the episode titled âOn the Beach,â which aired in 2002.

The ranch, once known as Mokule’ia, was the Dillingham familyâs getaway for many years.

At some point, the family added an equestrian center and oceanfront polo fields, which once hosted Prince Charles and other celebrities for a match.

There are a range of possibilities for the land. Developing some of the vacant acres is a distinct possibility, with the potential for a subdivision of as many as 70 lots, Beall explains.

The property also serves as a popular wedding destination, and the nursery business does well, but Beall says those businesses are basically breaking even now, and the owners are not currently running the ranch to make an extraordinary profit.

âThey’re not trying to create a lodge business or really getting the most out of weddings, that kind of thing. Their focus is much more on development,â he explains. âThey’re sort of keeping everything kind of status quo and waiting to see how the new owners will use those kinds of value-added elements.â

Previous owners had plans to put a luxe resort on the property that did not come to fruition. The current listing has enticed a number of dreamers with ideas for tropical bliss on their minds.

âIt’s everything from a developer who wants to get maximum density, on one end of the continuum,â he says. âThe other is kind of an end user, someone who just wants to have a huge private estate and maybe have a few homes for close friends and family.â

Thus far, the interest has exceeded his expectations.

âI don’t think it’s an exaggeration to say we’re getting at least two to three times the volume of interest that any of us expected,â he says, adding that this appears to be a promising time for the sellers to put the property on the market. âI’m actually of the opinion that we’ll sell it fairly quickly, which surprises me.â

Beall is with Hawai’i Life and the property is co-listed with Cushman & Wakefield.